Who Really Loves You?

A recent government study ($2.2 million dollars, over three years) had a very interesting conclusion. Although I do not recommend it, many people are trying this experiment on their own and are getting the same results of the government study.

--Put your dog and your wife in the trunk of the car for an hour. 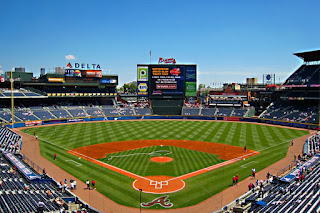 Looks like most of you like the Tar Heels to win the NCAA Men's Basketball Championship. 54% North Carolina ... 9% each for Kansas and Memphis ... and 28% for any team not seeded number one. So it's time to talk baseball! How do you think our Braves will do this year? Andrew Jones is gone ... Tommy Glavine is back ... and so far Hampton and Chipper are both healthy. What does your crystal ball say?
Posted by Spiff at 3:24 PM 6 comments:

To Bloom or Not to Bloom ... That is the Question 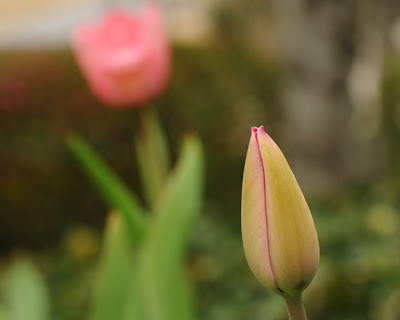 You Just Stepped In A Big Pile Of Spiff

Put all of the politicians in a big barrel ... mix them up ... draw one out ... let them make a speech ... and then check that speech for accuracy. After that, you'll need a shower because you'll be standing knee deep in horse hooey. Today's pile of Spiff comes from Clinton. No, not that one ... the one currently running for President. From this AP News Story about Hillary Clinton: During a speech last Monday on Iraq, she said of the Bosnia trip: "I remember landing under sniper fire. There was supposed to be some kind of a greeting ceremony at the airport, but instead we just ran with our heads down to get into the vehicles to get to our base."
According to an Associated Press story at the time, Clinton was placed under no extraordinary risks on that trip. And one of her companions, comedian Sinbad, told The Washington Post he has no recollection either of the threat or reality of gunfire.

According to a Clinton spokesperson, the Senator "misspoke.'

Don't know about you, but I think I would have remembered if snipers where shooting at me. But then again I'm not a politician.

Gotta run now, a huge meteorite just slammed into my house.
(Actually a pine cone from a nearby tree fell and hit a gutter.)
My office will issue a statement in a week or so about how I "misspoke."
Posted by Spiff at 10:27 PM 2 comments:

Thought I saw a snow flake or two today. Time to run to Publix for bread, milk, beer. Everybody panic!!!!
Posted by Spiff at 2:24 PM 4 comments:

Blast From The Past!

I know that some of you remember the "Fox 97 Ultimate Oldies Concert". First at the old Fulton County Stadium ... and then at the Georgia Dome. Lot's of incredible groups ... tons of great memories ... and a fun annual video contest. Do you remember this video from 1993?

Just started filling out my brackets for the NCAA basketball tourney. So far I have not missed one. I'll fill in some more brackets in the morning after a good night's sleep. This is not nearly as hard as I heard it would be.
Posted by Spiff at 9:59 PM 2 comments:

Just One Of The Reasons Why Our Generation Suffered Dain Bramage

The People Have Spoken

In true democratic fashion, the people have decided on which background they like best on my website. 48% preferred the black background while 15% would like a white background. And in TRUE American fashion, 37% could give a rat's rear end how my website looks. I love this country!!! To honor your decision ... this week's featured song will be "Black and White" by Three Dog Night. Remember, you must click the box once to activate and then hit the arrow button to play.
Posted by Spiff at 2:07 PM 1 comment:

Doubt if you ever see this happen again. The Georgia Bulldogs winning two basketball games in one day on the home court of the Georgia Tech Yellow Jackets. Due to tornado damage at the Georgia Dome the SEC had to move their tourney to Georgia Tech (who was gracious enough to help out in a tough situation). Speaking of tough situations ... the Dawgs had two win two games in the same day to advance the tournament championship game on Sunday. (Something that had not been done in the modern era of college basketball.) Well, Georgia did it. Beat Kentucky in overtime and then a few hours later beat Mississippi State by four points. Needless to say my daughters are very happy with the results. And I am very happy for them as I continue to pay for my youngest who is currently at UGA. Maybe I can get a baseball cap out of this.
Posted by Spiff at 11:48 PM 5 comments:

Since I have not heard anything from the new Oldies radio station yet ... I have decided to clean our basement. I have been very afraid to go down there as we've lived in this home for years and the junk continued to pile up a little bit at a time. Two furnace repairmen have gone down there not to return. I hear strange howling sounds late at night. Sometimes, when it is deadly silent, I can hear a voice whispering "redrum ... redrum." But, brushing all fears behind me, I tied a rope around my waist, anchored it to the basement door and headed downstairs, GPS unit in hand. The cleaning has started. So far I have found one of the two repairmen, 3500 spiders, and a very large caribou who is living in what appears to be a small forest area in the southeast corner of the basement. I will let you know how things turn out.
Posted by Spiff at 5:21 PM 4 comments: 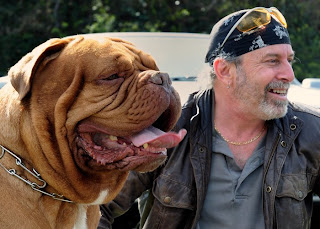 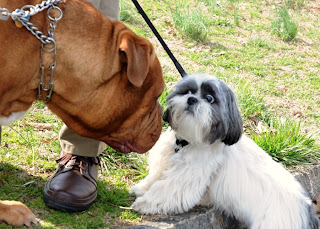 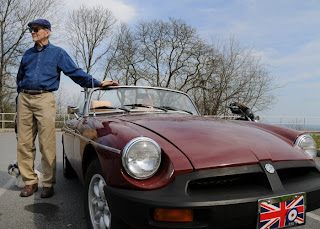 Met some nice folks on the top of Kennesaw Mountain today. "The Lip" on his custom chopper ... MG Man and his sidekick ... and Pedro the 130 pound Bullmastiff.
Posted by Spiff at 11:30 PM 3 comments:

Good To Hear The Oldies Back On The Air In Atlanta!

M-A Caught With Some M-J

Will this make a difference in the "Who is hotter" Gilligan's Island poll? Ginger or Mary Ann? Seems Mary Ann has been caught with some marijuana in her car. (See the complete story here.) We know everyone loved her coconut cream pie ... but what about her brownies?!!!
(Look at her eyes ... her EYES!!!!)
Posted by Spiff at 7:10 PM 2 comments:

It has been brought to my attention by a couple of people that it was difficult reading my posts on a black background. So, I'm considering a white background. Do you have a preference? Let me know by voting in this weeks' poll. Thanks! Just FYI ... I like the black because it makes my photos appear more colorful and vibrant.
Posted by Spiff at 11:33 AM 6 comments:

Prepare For The Recession! 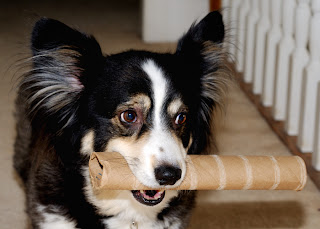 Gas prices skyrocketing. Unemployment on the rise. Stock market tanking. Debt levels on their way up. Can you say "recession"? Sure you can. But we can all get through this. We just have to tighten our belts a bit and cut back on our unnecessary spending. Best thing to do is get the entire family involved. We did. Even Brady, our Welsh Corgi, joined the fight. Instead of a nice, meaty bone as a treat ... he now spends some quality time with a paper towel tube. Yes, it can be done! We will make it through this recession and be better people (and pets) for it!
Posted by Spiff at 9:49 AM 2 comments: 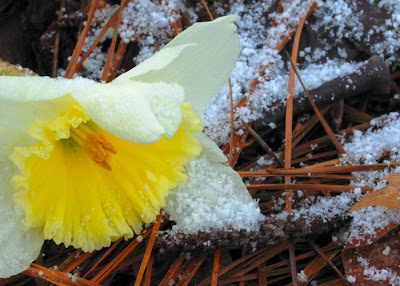 Dang! I thought spring had arrived. Flowers blooming, trees budding, temps over 70 degrees. What happened? Gotta love the Georgia weather.
Posted by Spiff at 11:29 AM 1 comment: 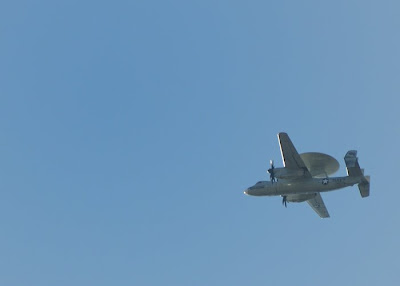 Well, the polls have closed. Not on the presidential race ... on my poll question: "What should I do with my life?" 59% of you wanted me to "attempt to land another radio job in Atlanta". 37% think I should start my own photography business. And the rest of you think I should be working at a fast food restaurant. So, I guess I will take the results of this very scientific poll to various Atlanta radio stations and I'm sure the offers of employment will come pouring in. Meanwhile I will continue to practice my photography, just in case. And ... "Would you like fries with your order." Hey, at least a microphone is involved at the drive-thru. Thanks for helping me out. A new poll will be popping up soon.
Posted by Spiff at 8:29 PM 4 comments: 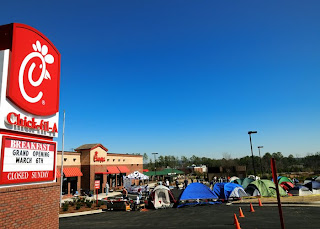 A new Chick-fil-A is opening not far from where I live. The first 100 folks in line get a free meal each week for a year. Some people will be camping out in line for a day and a half. We love our Chick-fil-A! 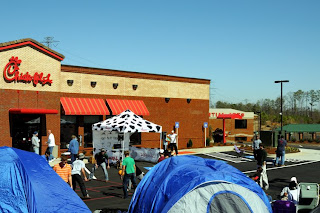 This Bud Is For You! 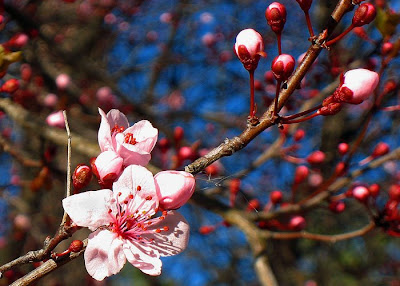 Spring is just around the corner.
Posted by Spiff at 12:08 PM No comments:

Not too long ago, we heard how cow flatulence was bad for the environment . . . not because it smells horrible, but because it contributes to global warming. Cows produce loads of methane when they break wind and methane supposedly contributes more to global warming than carbon dioxide, which is what factories, cars, and airplanes spew into the air. Apparently cow dung also emits methane. This is where David Albers, the president of BioEnergy Solutions, comes in. His idea: Why not ask dairy farmers to give him manure so he can turn cow dung into an alternative energy source? So this week David opened a plant in Riverdale, California, that is as big as five football fields . . . 33-feet deep . . . and filled with cow dung given to him by a local dairy farmer. Over a few days, the methane from the manure will build up under a tent . . . be pumped through a filter . . . and be sent off to a power plant in Northern California. That plant will send enough energy to power 1,200 homes.

How To Stay Cool While On Camera

THROW THE BOOK AT HER

In Beloit, Wisconsin failing to return overdue library books is apparently a serious offense. It landed Keely Givhan behind bars for six days. When a police officer pulled Keely over for a traffic violation, the officer found out about her outstanding warrant and took her to jail. She and her family couldn't afford to pay her fine so she remained in jail for six days.

What book do you think she kept too long?
Posted by Spiff at 5:42 PM 1 comment: 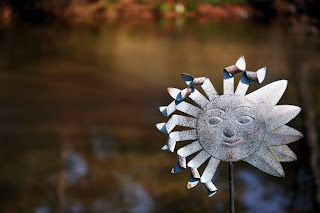 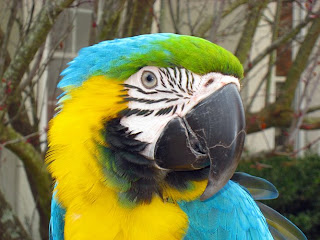 So, I'm taking a walk in my neighborhood when I hear someone squawking at me. I think to myself ... probably some young whippersnapper making fun of my baggy sweatpants and tattered sweatshirt. But no ... it's not some kid making fun of me. It's a bird making fun of me! A Macaw. There he is sitting in a tree yapping away at whoever passes by. So I shoot him ... with my camera. (For a really close look at this fella, click here.)
Posted by Spiff at 10:24 AM No comments: