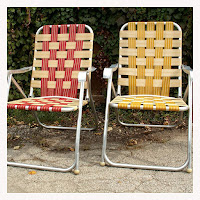 I remember, as a youth, my dad and mom sitting on those cheap, folding lawn chairs out in front of our opened garage. They were not alone. Neighbors all along the street were doing the same thing. Riding my bike down the street, I would get the friendly wave … a cheerful greeting … or the occasional “how about those Bulldogs?” (Our high school mascot was a Bulldog.) I could also keep tab on the Cubs as day baseball was in style and living in Illinois, Cub fans had their transistor radios tuned to WGN while sitting out on their driveways.

Today, it appears to me, that many people have disconnected from humanity by connecting to the internet. You can often find them, not sitting in the front of the house making face-to-face human contact, but “out back” on their deck or patio keeping tabs on their kids via text messages … annoying their Facebook friends with political rants … or anonymously using social media to “stir up the pot” on political, sports and social issues. I can’t remember ever overhearing my folks talk about not being friends with someone just because they were a democrat or republican. Dan, that rabid republican next door sure was nice for bringing over some of his delicious garden-grown tomatoes for no reason at all. And widow Brown, that die-hard democrat, sure was generous with those mouthwatering apple pies she so often shared. My dad was just as generous. He often sent me to Mrs. Brown’s house to mow her tiny lawn for her … just because it was the right thing to do.

I’m sure that I’m looking at the past through rose-colored glasses … but it does seem to me like people were less confrontational back in the day.

For my part, I’m off to “the Walmart” to get a cheap, yet colorful aluminum lawn chair. I’ll park myself out in front of the garage, leaving my smart phone inside the house. I’ll wave at the passersby’s … talk to the kids on their bikes … and on occasion shout out, “how about those Dawgs!” If I have not received a cease and desist email from my HOA in a week or so, I will pat myself on my back for reintroducing a teeny bit of humanity to the neighborhood.
Posted by Spiff at 9:18 AM