“You know how much I love animals.  Especially dogs. But how about waiting ‘til we get out of this apartment into a home with a big back yard?”  It was my last ditch attempt to convince my wife Duffy that this was not a good time for a pet.
She smiled, handed me the car keys and said, “They’re expecting us to pick him up in 30 minutes.”  Two hours later an angel moved into our apartment.
Let me back up just a bit.  The year was 1987.  My partner Randy and I were morning DJ’s at a radio station in Charlotte, North Carolina.  Charlotte, a growing metropolis, had just been awarded a NBA franchise.  Professional basketball was coming to the Carolinas!  The team didn’t even have a nickname yet.  So naturally one morning we decided to name them.  We came up with “The Fighting Corgis.”
A corgi is a dog that originated in Wales and it has a long body, short legs, and a fox-like head with huge ears.  There are two breeds of Welsh Corgis.  The Cardigan, which has a long tail, … and the Pembroke that has no tail at all.  Randy & I decided on the Pembroke because, well, it looked funnier.
After just a few days of campaigning for the nickname “The Fighting Corgis” we were inundated with irate phone calls from Corgi breeders.  They were very upset that we had the gall to call their sweet pets “Fighting” dogs.  We were invited to a local dog show to meet with the breeders and their beloved dogs.  That’s the first day I met “Andrew.”
Andrew was a tri-color Pembroke Corgi.  Six months old and ready to take on the world.  Duffy fell in love with him immediately and after two days of useless arguing we had a new roommate.
The first night home I put Andrew on a leash and took him outside for a short walk where he quickly decided that my foot looked like a fireplug.  I grabbed him by his collar, lifted him to my face and snarled, “That’s strike one!”
Two days later I walked into the apartment and there, standing over what was left of my large photo album, was Andrew with what appeared to be a picture of me tightly between his jaws.  I lurched forward, grabbed him by the scruff of his neck and whispered through my clenched teeth, “That’s strike two!”
I would never make it to strike three.  Andrew quickly won over my heart.  He had Duffy’s heart from day one.  The three of us became inseparable.  We took long walks.  We played with tennis balls until they no longer looked like balls at all. And we would fall asleep together exhausted from our daily adventures.
We moved from the apartment to that home with a big fenced-in back yard.  Andrew loved it.  Duffy would plant flowers, Andrew would rearrange them, and I would laugh.  Little did I realize it at the time, but a new challenge and a life-changing event was just around the corner.
In December of 1988 Randy and I were fired in Charlotte but quickly found a new morning radio job in Atlanta, Georgia.  Things could not have been better.  Then in late 1991 Duffy caught what we thought was bad case of the flu.  Her cough just wouldn’t let up.  Early in 1992 Duffy was diagnosed with lung cancer.  Andrew never left her side.  Duffy died in my arms on January 22, 1993. 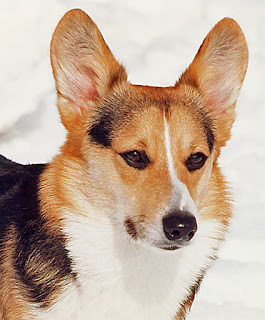 I was lost.  So was Andrew.  He would put his head on the windowsill and gaze down the driveway waiting for Duffy to come home.  I would often lie next to him hoping for the same thing.   When I started to cry Andrew would immediately cuddle up next to me and put his chin directly on my cheek to dry the tears.  He would then gently press down with his chin as if to say, “It’s going to be ok.”  We repeated this ritual time and time again.  Andrew became my shadow and together we began our recovery.
I gradually re-entered the real world and began to date again.  Andrew was always friendly with my dates but took no particular interest until he met Janet.  Janet was a single mom with two fantastic and wonderful daughters, Lauren and Meredith.  Beautiful, talented, intelligent and caring … Janet healed my heartache and I fell in love.  Andrew too was in love with Janet and the kids.  We were married on May 18, 1996.
The years flew by … the girls were growing up … Andrew was an old man.  He had back surgery in June of 1999.  Then one year later he began to have problems eating.  He couldn’t keep food down.  His back legs were almost useless.  And finally he would not eat at all.  I had a tough decision to make.
Janet and I talked … I prayed … and on Friday night July 21, 2000 I decided it was time to let Andrew go.
I snuggled up next to him that last night and began to cry.  He looked up and slowly put his chin and my cheek and gently pressed down … “It’s going to be ok.”
Saturday afternoon at the Veterinarian Clinic I held Andrew tightly.  I thought of everything that he had done for Duffy, Janet, Lauren, Meredith and me.  I don’t know if I would have made it without him.  He was indeed an angel.  The needle pierced Andrews’s front leg.  I held his face close to mine.  Our eyes met.  I put my chin on his nose and gently pressed down.  He closed his eyes.  “It’s going to be ok.”

I know this time for me and my "Angel" will come sooner than later, so this beautiful tribute to Andrew has touched my heart. Thank you for sharing.